We regularly hear from contractors that they are confused about how to handle information marked as For Official Use Only (“FOUO”), Sensitive but Unclassified (“SbU”), or other “legacy” markings under the new Controlled Unclassified Information (“CUI”) program. Another common question is how to handle information that isn’t marked as CUI but which the contractor THINKS might actually be CUI.

In some cases, these contractors are being told by consultants and others that they should add CUI markings to the information. Thankfully, the contractors’ “Spidey-Sense” tells them that this might not be right. We agree with them – that’s not the right approach. At least, not without authorization from an authorized government representative (sorry for using “authorized” twice there, but it’s important!).

There appears to be some confusion in the broader government contractor/service provider/consultant community over these topics. Some argue that “authorized holders” can mark legacy information, as well as newer “suspected CUI” (i.e., information the contractor things is CUI but isn’t marked) as CUI. They even point to different statutes as the basis for their arguments. Unfortunately, their reading of the statutes is inconsistent with the plain language in other portions of the statutes, and they are actually advising contractors to do something that is against the law. At the end of the day, while a contractor’s liability may be relatively low, it’s still not the right direction in which to point contractors.

Read on if you want to learn more!

Hierarchy of the CUI Program

To help clear up some of the confusion, it is important to first understand the hierarchical nature of the different executive orders, regulations, and instructions/memos involved. The CUI program traces its origins back to Executive Order 13556.  As part of that Executive Order, former President Obama directed the National Archives and Records Administration (“NARA”) to create the CUI program.  NARA eventually published the CUI program as 32 Code of Federal Regulations (“CFR”) §2002.  This is a series of regulations that apply to the federal government agencies and, by extension, to contractors and others handling CUI.  DoD’s efforts, including any DoD memos, CMMC, and DFARS 252.204-7012, -7019, and -7020, all are based on 32 CFR §2002 and supplement what’s in the CFR. DoD’s efforts cannot contradict what’s in the CFR, but they can act to add additional clarity/context for DoD’s CUI program.

Starting from the Beginning

If you take a moment to read those sections, you’ll note a few important quotes, including:

“Authorized holders of CUI who, in good faith, believe that its designation as CUI is improper or incorrect, or who believe they have received unmarked CUI, should notify the disseminating agency of this belief.” (emphasis added).

NARA later refers to this as a “challenge”. They then go on to say:

“Until the challenge is resolved, authorized holders should continue to safeguard and disseminate the challenged CUI at the control level indicated in the markings.”  (emphasis added).

NARA even takes this one step further a little later in 32 CFR §2002. If the contractor doesn’t agree with the agency’s response to the challenge, the contractor can initiate a dispute in accordance with §2002.52. That section states, in part:

“Until the dispute is resolved, authorized holders should continue to safeguard and disseminate any disputed CUI at the control level indicated in the markings, or as directed by the CUI EA if the information is unmarked.” (emphasis added).

As with the “challenge” process above, this means that contractors should continue to treat the legacy and suspected CUI as non-CUI until either the dispute is resolved or the ISOO (the NARA component that oversees the CUI program, also referred to as the CUI EA or Executive Agent) tells them otherwise. So, it’s pretty clear that 32 CFR §2002 does not delegate to the contractor any authority to mark legacy information or suspected CUI as CUI.

DoD Instruction 5200.48 (“DoDI 5200.48“) is an instruction from the Office of the Under Secretary of Defense for Intelligence and Security to all DoD components.  It lays out DoD’s approach to implementing the CUI program defined in 32 CFR §2002.

32 CFR §2002 includes language that gives agencies latitude to determine how to handle the “challenges” described above, including how to handle suspected CUI. Since DoDI 5200.48 does not have an explicit provision that describes how DoD will handle challenges, 32 CFR §2002 makes it clear that its rules apply. As noted above, 32 CFR §2002 does not grant contractors authorization to mark suspected CUI as CUI on their own. They must ask the information owner to make a determination and await the information owner’s decision. 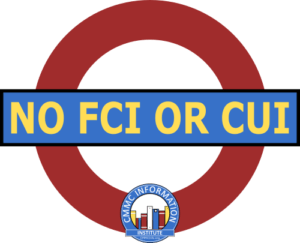